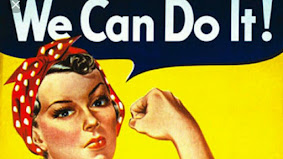 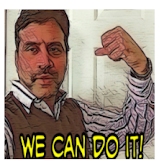 After posting our last survey, WE CAN DO IT, we started getting such comments as shown below, which led us to clarify the origin of this slogan, and what it really means.  It appears that some section of the population has misunderstood the meaning of this slogan shown in the above poster, which led to this clarification article. We would also be clarifying why we have added a male model's "WE CAN DO IT" image along with the original "WE CAN DO IT" slogan image in this section. 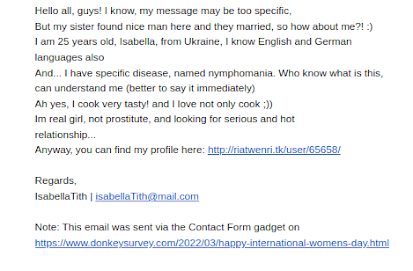 This original slogan and poster was supposedly conceptualized and developed by Howard Miller, a graphic artist, for Westinghouse Electric  during World War II time to improve the morale of female workers. However, as per reports out there, this poster did not get popular until the early 1980s, and has gained popularity in the media over time to promote feminism, improve worker morale and extensively utilized by politicians in their campaigns. At the same time, as with any such campaign, there is a dichotomy in opinion with this ad campaign where another section of population believed that this poster that was primarily used for internal purposes early on by Westinghouse Electric in 1943, was released to extract more labor  from already working women force rather than an ad campaign to hire new female workers.

Irrespective of what the original reason for this poster campaign was, this picture has gained in popularity and purpose over the years, where more and more women tend to relate to this poster slogan now than before.

Ok, now you would have gotten a perspective on this picture based on history. If this is the reason for sharing this slogan poster, then why did we share the other image in the previous article?

The answer being that, in this day and age of pushing for equality, where the world has seen progress in gender equality in bits and pieces over time, we also need to understand that such equality campaigns needs to be relevant for every gender catering to the changing times. During the current times, the entire world has seen the impact of Covid in many family's lives, which has taken away the livelihood, savings and lives of loved ones for many irrespective of gender, and the morale is down for all genders. Taking this current situation into account, and the changing times, we decided to include another image to enhance the morale of all genders through a subtle humo(u)r with the belief that this add-on would bring in smile in some who read that article, if not all.

BEFORE / AFTER SURVEY - INTERESTING PICTURE BASED SURVEY

BEFORE / AFTER SURVEY Please let us know which is the before picture and which is the after picture? Loading…

VAL-U-PRO CONSULTING GROUP, LLC - SRIKANTH KIDAMBI SurveyDonkey/ GuyGalUp/ GuyGalUpDown/ GalGuyUp Dec 18, 2017  Which of these shots do you like the most? 724 votes  -  votes visible to Public 12% Monkey Shot 17% Behind the back shot 21% Do whatever takes shot 16% Up in the air shot 34% Baby Shot no comments no plus ones one share 1 Shared publicly • View activity Add a comment...

VAL-U-PRO CONSULTING GROUP, LLC - SRIKANTH KIDAMBI   Jan 30, 2017 Smart Meter units hackable. How realistic is this one? Wait for the complete fact-based story. Subscribe to read ft.com Add a comment... no plus ones one share 1